Reflections on the 100th Anniversary of the Federal Reserve

This chart plots the US price level from 1775 (set equal to one) until 2012. In 1913 prices were only about 20 percent higher than in 1775 and around 40 percent lower than in 1813, during the War of 1812. Whatever the mandates of the Federal Reserve, it is clear that the evolution of the price level in the United States is dominated by the abandonment of the gold standard in 1933 and the adoption of fiat money subsequently.   One hundred years after its creation, consumer prices are about 30 times higher than what they were in 1913.  This pattern, in varying orders of magnitudes, repeats itself across nearly all countries.

You can also view a Webcast of the event. 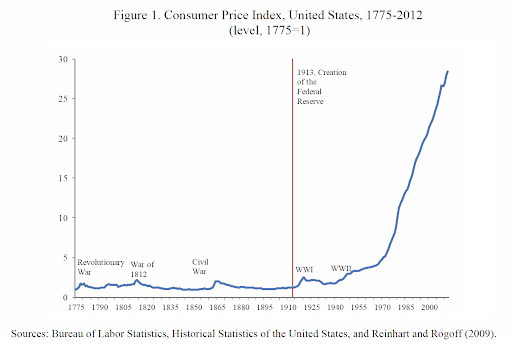