Lewisville Dam is “very high” risk, “failure initiation foreseen" and may be “extremely high” risk and “critically near failure”

Lewisville Dam is well past its design life and in need of repairs. We all need to plan accordingly.

If you live in North Texas, please read:

Below are a few quotes worth noting!

With a full reservoir behind it, a 65-foot-tall flood wave traveling 34 mph would quickly inundate a wide swath of Lewisville, Coppell, Carrollton, Farmers Branch, Irving, Las Colinas and other communities bordering the Trinity River.

Like a tsunami, the wave would submerge downtown Dallas in roughly 50 feet of water, the Corps estimates, causing more than $21 billion in property damage, before continuing south down the Trinity River toward the Gulf of Mexico.

The Corps has prepared maps of the inundation area and casualty estimates but won’t release them to the public on orders from the U.S. Department of Homeland Security. The Corps also will not release a list of its top 10 high-hazard dams in the country because it might "open the public to security risks from those that could use the information to do harm," according to a spokesman.

The Corps says it’s working as fast as it can to come up with a permanent fix for its badly distressed dam. It plans to make its decision in the next six months.

The dam is so unstable now that the Fort Worth District is considering asking Corps headquarters to upgrade its risk classification to the highest: “critically near failure” — that is, “almost certain to fail under normal operations … within a few years without intervention,” according to a Corps document.

It is currently ranked as Dam Safety Action Class 2, with “very high” risk and “failure initiation foreseen.” But the Corps is weighing whether to raise this to Class 1, the category for dams that are “extremely high” risk and “critically near failure” and require immediate action to avoid catastrophe.

431,000 in harm’s way the dam posed a “very high risk” to the population centers downstream from the dam. That is, Lewisville, Coppell, Carrollton, Farmers Branch, Irving, Las Colinas, Dallas and points south.

“It’s a balancing act between maintaining the integrity of the structure while also minimizing flood damages downstream,” “It would be a much bigger magnitude to the Dallas area than Hurricane Katrina was to New Orleans,” says Vazquez. “It’s a nightmare scenario.” 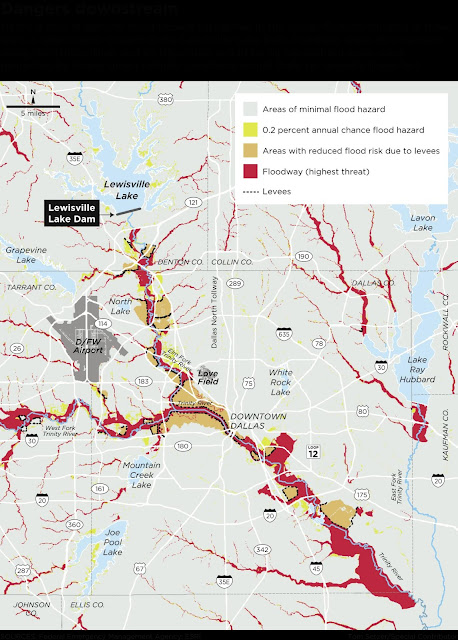